To know the road ahead 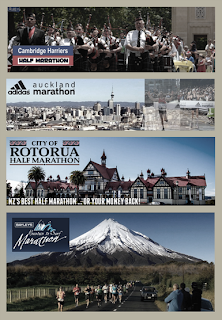 I'm about to begin my 8th and last base building 80 km week. 640 km will be some achievement for me. And while not injured or defeated I have to say I'm a little knackered. Actually a lot KNACKERED and that probably doesn't nearly cover it either. (Was going to use the word buggered but apparently it has another meaning north of the equator)

Now I know it's not the 100 to 160 km/week some of you other deluded, obsessive, neurotic and disturbed bloggers are achieving ... but I'll get there ... you'll see. I may even sneak in a 'double' or two which now has a certain appeal.

Where to from here in my road to Boston? It's time to stick my neck out and commit to the following to either gauge progress or identify gaping holes in my overall preparation.

Here is a running link you may enjoy. Chris has a You Tube channel called Cicirunner This guy is well worth a watch. Running is his life and he isn't that bad at it either. You have to love his passion.

To know the road ahead ... ask those coming back. An old Chinese proverb. Run hard, run long, be safe and have a great week.