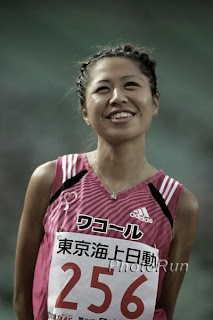 The 2008 Osaka International Women’s Marathon was won by Mara Yamauchi in a time of 2.25.10. Surprising though this race isn’t remembered for her achievement at all. The race stood out for the efforts of the woman that finished 19th in a time of 2.40.54.

It was Kayoko Fukushi’s first full marathon and many were excited at how well she’d do. Kayoko was a rising star at the time having set Japanese national records in the 3000, 5000 and half-marathon. Expectations were high for her and she certainly didn’t disappoint. From the start she leapt out well ahead of the others after setting a blistering pace.

But at 30K commentators noticed her pace drop and eventually at around 35K, Kayoko was passed by Mara, the eventual winner. She would be passed a further 18 times which for many runners, me included, isn’t that unusual at all but for her, well who would have thought. What followed is truly one of the more gutsy achievements ever seen.

Most of us recognise that feeling of hitting the wall in a marathon. The feeling that an elephant has selected lucky you for a piggy back ride 10K from the finish. Ever joint throbs and you feel as stiff as a board. Most of us find a way to the finish and vowel never to do it again … until the next time. But have we really bonked?

For Kayoko, she leaves us in no doubt. You see what makes the race so memorable was her determination to finish. She fell four times, including one collapse just five meters from the finish line. With her mother in the stand you just can’t help but get caught up in the moment, be inspired and find a new appreciation for elite athletes and of course the sport itself.

Asked why she just didn’t pull out Kayoko said “I wanted my first finisher’s towel”. Kayoko Fukushi went on to place third in the marathon at the Moscow 2013 World Athletics Championships and is regarded as Japans real hope at the next Olympics.