Friday was one of those rare days I really struggled with.  It’s fair to say my job at the moment is more than a little worrying and stressful. More frustrating is my inability to influence what’s going on which only compounds my anxiety.

Running has always been my go to medication at times like these. After all it’s supposed to release endorphins, reduce cortisol and relax your muscles thereby relaxing the mind. Most importantly for me though is the alone time I get that enables me to sort through those issues I’ve had during the day. While running they seem so much more manageable and less daunting.

Compounding my gloom last Friday was knowing that after missing my Thursday run I had a lot of ground to make up if I was to reach the 90 k per week target I’d set myself. The following 3 days required 64 k. Running can be a selfish sport if sacrifices involve family and I have to watch this. Other ‘must completes’ for the weekend included mowing the lawns, cutting the hedge and washing the car. I regard these latter activities as cross-training or so I keep telling myself. 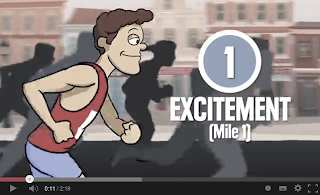 And off I went on my Friday night run with the weight of the world on my shoulders but knowing that at some point they’d have dissipated into nothing more than trivial annoyances. After all running has never failed me this way, ever.

My training schedule lists Friday as an easy 16 k. At that mark I still had things to think through so I continued. At 20 k I felt great, well physically anyway. Inside, I still felt a little empty and uneasy. What I needed was to feel worthy, fulfilled and contented. That’s what was missing but how? Hell, I think I might run a marathon tonight and reward myself by taking the weekend off! What a gift that would be and on I pressed. I never doubted the distance. What I needed was to feel good at the end of it. What a boost in confidence that would be with the Auckland Marathon just a few weeks away. The last 5 k did hurt a little but I had so much more to give as I stopped my Garmin and recorded the time.  That was the pleasing part.

Why not the added 2 k for a PB? I’ll leave that for race day. After all it’s bad luck to run your goal distance beforehand during training isn’t it?

And how am I feeling you ask? Much better thanks. Ready to tackle another week.