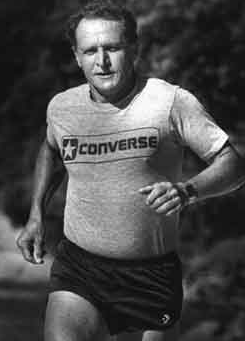 After two weeks on the couch following my ‘minor op’ I launched into a newly created and somewhat ambitious Jack Foster inspired training week. For more than ten years Jack ran 10K on Monday, 21K on Tuesday, 10K on Wednesday, 24K on Thursday, rested on Friday, 13K on Saturday and to finish, 32K on Sunday for a weekly total of 110K. Jack based this schedule on the teachings of New Zealand’s premier running coach, Arthur Lydiard. Absolutely crucial to Arthurs plan were the 3 long runs per week. Having never ever run 2 in any week let alone 3 I’ve got no idea what possessed me to give it a go. OK who said stupidity?

So how did I do? I’d like to think 5/10 is a reasonable reflection of my efforts. After all I did get all 3 long runs in although Sundays was a little shorter than Jacks 32K. What came as a real shock was just how much those consecutive long runs take out of you. I literally didn’t have the fortitude to face those intermediary runs at all. Observers might have scored me a lot lower it has to be said but they can buggar off. A little sensitivity and irritability you detect? Side effects I’m sure of being ill prepared which only reinforces a week where I bit off a little more than I could chew.

I now understand the massive step up the Lydiard program demands of you. Also just how much further I’ve got to go to reach my potential. In my mind that point will come when I’m able to run consistent weekly Lydiard distances and easily.

And as for next week you ask? Perhaps just the 2 long runs with an 80K total might just be the ticket but no promises. I’ll see how I feel in the morning which is what we all do isn’t it?

Training the Lydiard Way. 28 weeks to a PR