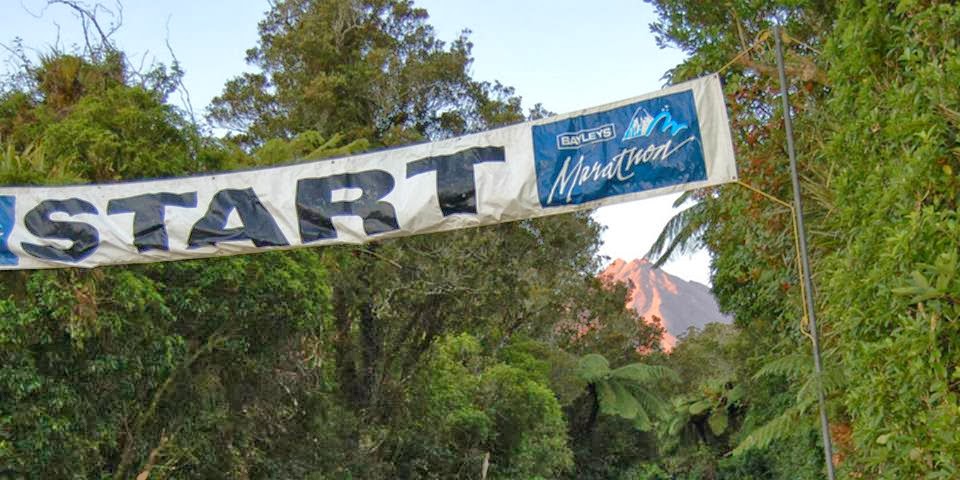 The bus trip to the foot of Mt Taranaki began at 6.30am. In convoy with many other buses and support vehicles the 25 minute trip passed so quickly. I typically keep to myself when on public transport and have the art of pretending to be asleep flawless after years of practice in Japan. Today however I wanted to engage with other like minded nervous runners. Next to me sat a local about to attempt her first full marathon. I’ve done a few halves and ran a 40K in preparation for today, she said almost bursting with excitement. Every runner has a secret weapon they long to share at moments like this and hers was drinking cornflower mixed with water which to be honest left me speechless. 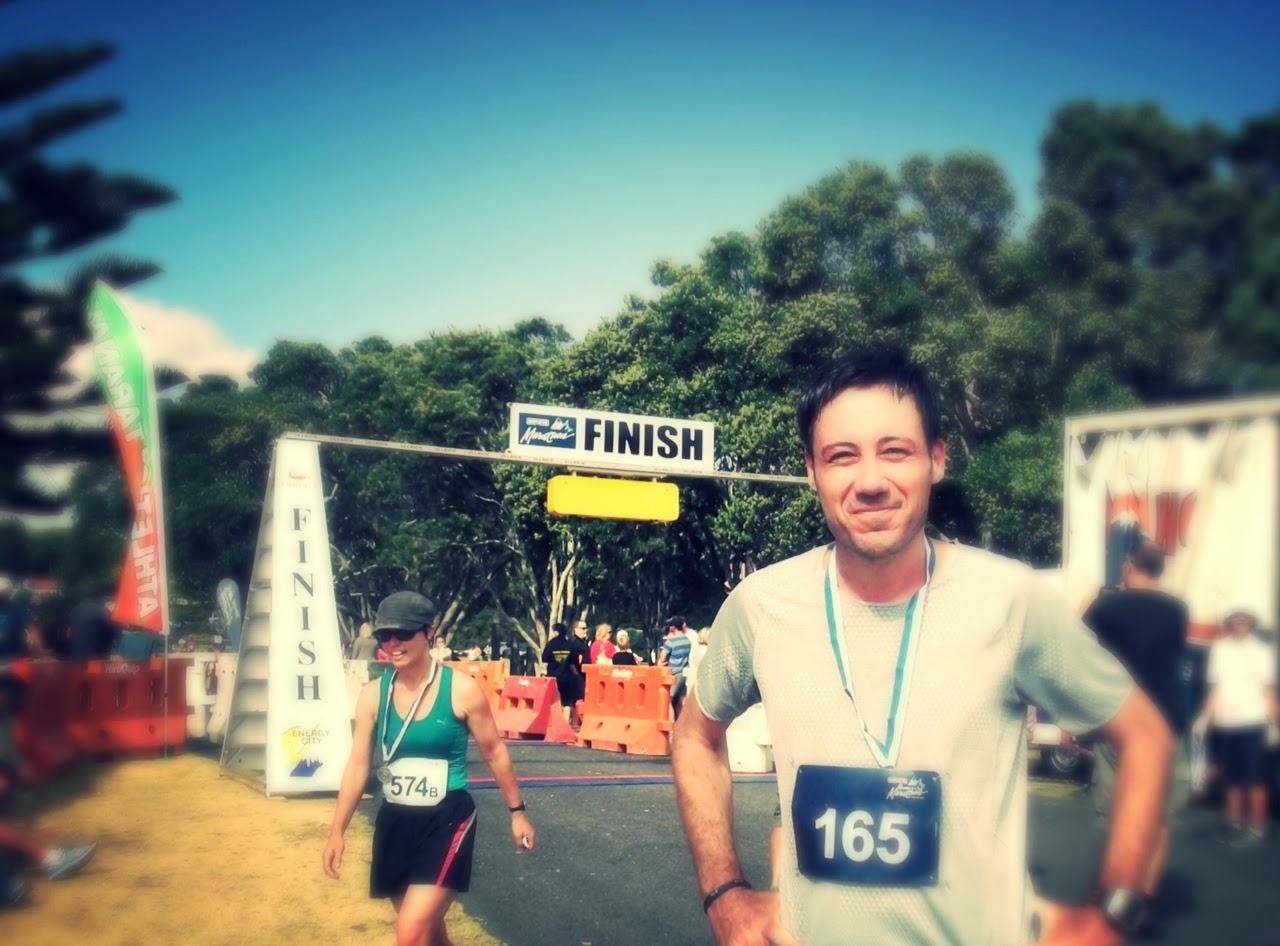 Stepping out of the bus we found ourselves in amongst forested bush. The air was crispy cold with not a breath of wind.  I could already tell that the day ahead was going to be perfect. I hoped the same could be said of my run. 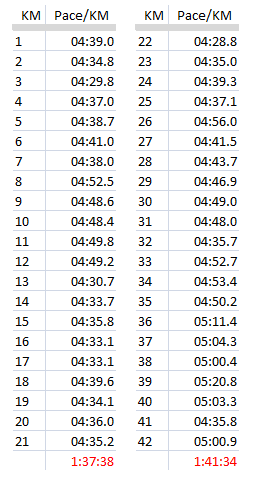 I class myself now as an intermediate marathon runner. With such experience comes an acute ability to judge portaloo waiting times. A novice may enter a queue far too soon only to find that they still have 30 minutes of nervous pre race time to build up that ‘urge’ again. 3 minutes to go, the starter announced and without thinking I found myself jumping the railing and dashing for my choice of any of the now vacant portaloos for the second time much to the amusement of many other runners. Back in line and with still 30 seconds to go I thought, who’s the novice now then … perfect timing.

My signature training run each week takes me out of town up a gentle incline. Depending on how far I go that elevation could be as high as 250m over 12K. Turning for home I run downhill and push myself hard before calling it a day. 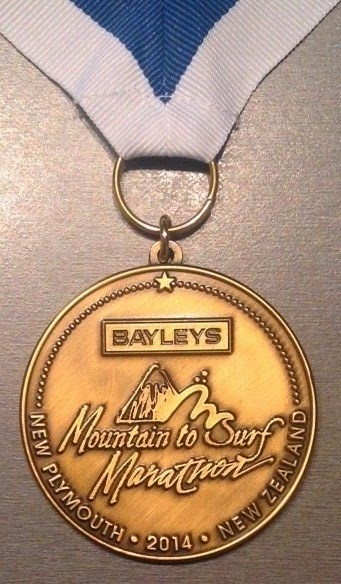 With this race I was faced with 5K downhill from the word go. I knew what the consequences could be if I started out too fast and held back as much as possible. 5K in 22.59 could have been far quicker. From 7K to 11K we then climbed gradually which gave me a chance to work another muscle group and that felt good. At 12K we made a hard 90 degree turn left to begin the second big descent of the day and it was then I felt the slightest of tightening in both quads. A feeling of absolute dread came over me, after all it had only been 12K! I instantly pulled back. I ran that 12th K downhill in 4.51 hoping to lose that foreign feeling. With no improvement, it was on to plan B. Run as many 4.30s in a row as possible. After all the finish line was now ‘just’ a couple of hours away. Perhaps I could finish and be on that bus home before my quads realised it. 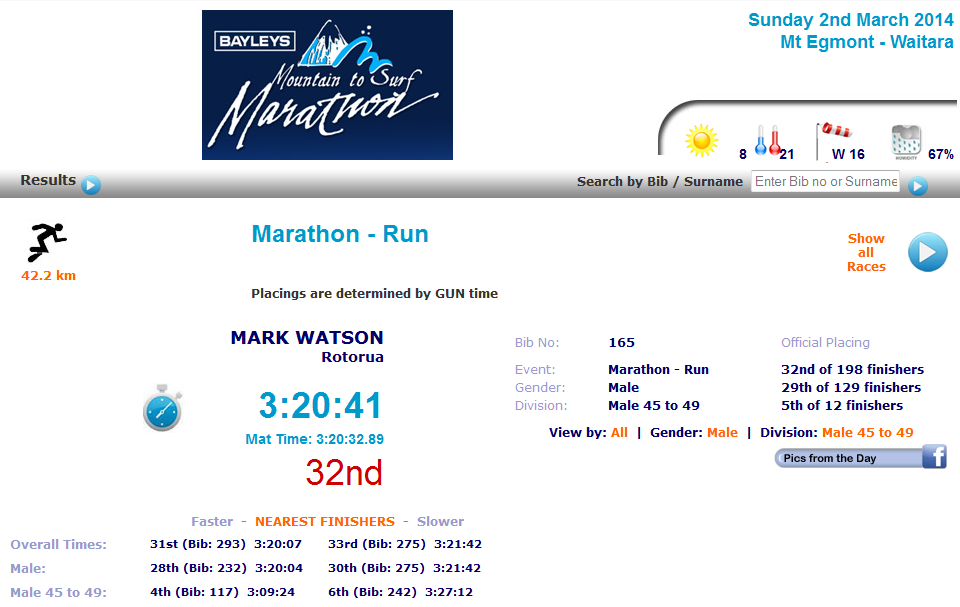 I ran the next 12/13K at around 4.34 pace. 30K in 2.19 (4.39 min/km) was probably a little faster than where I wanted to be. Luckily my thoughts shifted from these complex internal calculations to yakking to a girl about our goal times. She had the cheek to tell me she’d only run 15K in her long runs to prepare! She predicted I'd smash my goal time of 3.1x.xx before wishing me luck and taking off! Can you believe it? As I watched her increasing leave me behind I couldn’t help but envy her immaculate running form and nothing more.

Proud of myself for hanging in there and it has to be said a much wiser runner having had the experience.

I was first on the bus back to the city. A few minutes later a guy literally leaps aboard like some young gymnast half his age. How did you do? He asked. 3.20 I replied proudly which he said was fantastic. And you? 2.56 he proclaimed. Next on was a guy who again looked pretty pleased with himself and so without waiting I asked how he did. 2.46 he said at which point I asked the driver if I was on the wrong bloody bus! Third guy on ran a 3.09 and looked so familiar. It wasn’t till I got back to the hotel that I realised just who he was. In May last year I posted his photo taken from our local newspaper. A wonderful shot capturing the absolute joy of marathon success. Michael Dall, I’ll be sure to share my story with you next time. The last guy on finished in 3.37.

Incredibly the driver of this 30+ seater bus, with just the 5 of us aboard, started the engine, closed the door and pulled out to begin our 20 minute trip back to the city. Huddled together we talked and joked about all things running. Each of us at such different abilities and yet bonded like no other strangers could possibly be. I wish that trip had lasted a little longer, I really do. Still, I have no doubt that we’ll meet up again ready to do battle, not with each other but with the 42.195K that is the marathon.