Scott Brown posted a little gem yesterday titled ‘The philosophy of running’. In it he talked about the power of running on mind and body. That running opens a window to one’s own spirituality and consciousness much like religion is said to do for others. I liked also his concept of living life in the NOW and the way running awakens you to the miracle of feeling alive.

Like Scott, I too once plugged into various sounds. For me it was REM, ACDC, the odd audio book like the one written by Haruki Murakami. Hell, I even uploaded a truck load of Japanese vocab for ‘listen and repeat’ drills at one point. Looking back I recognise now that I entirely missed the point of it all. All that noise served only to either distract or artificially motivate while out on those long runs.

It takes a while to enjoy the run in its entirety. I’m not there yet by any means. But I can say this. For those moments where I’m in the NOW and loving it. Where I feel so connected with my surroundings that time stands still and mercifully my Garmin says otherwise, there really is nothing else I’d rather be doing.


These past few weeks however have been tough for a truck load of reasons. I won’t bore you with detail but if I had to isolate one, it’d be that persistently nasty shitty left psoas of mine. With just 4 weeks till the Auckland Marathon I don’t have the luxury to ease back. That’s right I don’t! So I stick to the program and continue to run. New shoes, shorts, t-shirts and watches help get me out the door but I wish it could be easier.


Saturday nights run was a disaster. A 10 km easy paced effort that from the outset hurt like hell. Howling wind and the odd shower didn’t improve my mood either. The 4.55 paced result left me totally spent, sore and yet pitifully relieved I was able to run under 5 minute pace. My scheduled 30 km run the next day filled me with a sense of foreboding. I slept lightly that night hoping the wind would die down just a little.

With chin held higher than normal, a shorter stride, swinging relaxed arms and more of a mid foot strike I set out gingerly.  The Dennis Kimetto videos I’d watched the night before inspired me to run this way. I kind of felt faster and as each km passed I wondered why that psoas of mine wasn’t hurting. Encouraged, I exaggerated my new found ‘Kenyan’ form and increased the pace ever so slightly. This for sure is the NOW feeling Scott had referred to in his post. The only thing on my mind was rhythm, my relaxed breathing and a connection to everything around me. A 4.46 paced 30 km run completed relatively easily left me feeling elated and yet somewhat puzzled. Where on earth had that come from? I’m back baby. 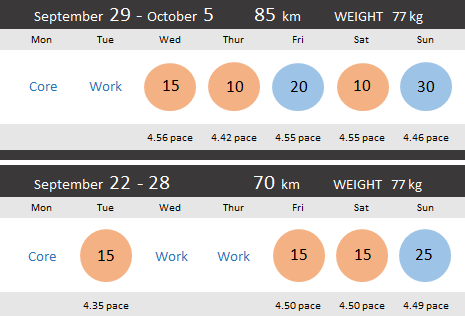