I’d intended to put a positive spin on this race report but the more I reflect on the day the more I can’t escape that all too familiar feeling of disappointment. Setting that to one side, I was thrilled to take part. I love to run. It’s that simple.

Auckland again turned on her charm for the nearly 3,000 full marathoners. If I said it was slightly muggy most would say I was clutching. Fewer still would support the notion that at the 31k turn for home there was a mild head wind. I will say this though. A 6am start is bloody insane. Knowing all 5 alarms in the hotel room were set to 3am made sleep for me impossible for the second year running …

Conscious of that dodgy left knee of mine playing up again, I cleverly decided to finish the race as quickly as possible. Nothing silly though. If I followed the man with balloons tied to his shorts wearing the number 3.15 I’d be home in no time and relatively pain free I thought. Realistically a time of 3.19 (4.44 pace) was possible so the longer I kept those balloons in sight the better.

Those yellow bouncing balloons disappeared at around 17 km. It didn’t bother me. I was still running at a pace of around 4.35 and I felt really good too. At the half way point I felt even better! 1.37.37 at 4.37 seemed easy and best of all, the knee felt fine. I couldn’t believe it. The only concern I had was the amount of fluid I was drinking. It was hotter than I’m used to and the sensible thing was to drink earlier than I had planned. Previously this had always resulted in disastrous side stitches. That didn’t happen either.

I remember number 5642 just ahead of me within the mob of 3.15 runners. What struck me at the time was how effortlessly she seemed to eat up the distance. Silly I know but for at least a km I modified my cadence and arm carry to mimic hers. Of course in a discreet manly way I might add as I grappled for any advantage. Later I searched the results expecting to find her at around the 3.16 mark. To my surprise she finished in 3.06.22 and 6th female. Her splits read 1st half at 1.34.13, 2nd half at 1.32.09. The much sort after negative split. Therein lies the difference between us. Nancy Jiang is an accomplished marathon runner who ran to a plan built off the back of solid training and I hope many many years on the road.


At 33k my average pace was still around 4.40 which I’d have easily taken before the start. What followed however can only be described as a weak limp finish. It wasn’t as if I’d hurt myself either. I struggle even now to put my finger on it. Last year I tucked in behind a couple for a good 4k which helped a lot. This year I seemed to find myself running alone. In fact I was hardly passed at all that final quarter which didn’t help. Or was it that I just couldn’t face that all too familiar pain of the final push once again. I coasted easily to the finish in a time of 3.23.38. I placed 217 overall and 22nd in my age group. The 3.19 time I’d hoped for earlier still some way off buggar it. (GARMIN SPLITS HERE).


I have to take some positives away though. I love to run. I love it more than I care to admit. Last Sunday was a day I’ll never forget in a line of many and I’m excited at the thought of another. I’m still on the improve and know I have a 3.15 in me and soon. Best of all, I seem to be injury free. Dodgy groin feels fine and so too is the knee and who’d have thought that just a few weeks ago? 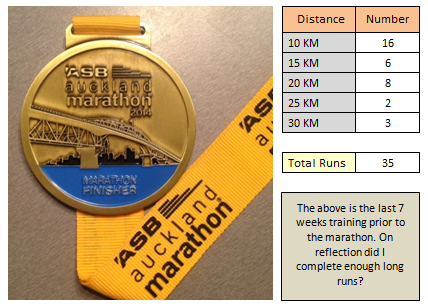 The sport of running owes me nothing. I’m grateful for the happiness and good health it provides me. Because of this I’ll run as long as I can, as far as I can and as often as I can. Now to tackle my next training plan.