“It was my goal to go under two hours 40 minutes but that wind made it really hard going. It got really bad when we turned on to the state highway about 15km from the finish. It was like a punch in the face. I thought I was in better shape this year but that wind was so tough” American Samuel Corbett reflects after winning the Mountain to Surf Marathon on Saturday in a time of 2.41.11.

It’s the first time I’ve slept well on the eve of a marathon. I even woke 15 minutes before the first of my 3 alarms had a chance to engage. Each had been strategically set at 5 minute intervals (4.50am, 4.55am and 5.00am). A lesson I learnt many marathons ago now. You see the discharge of 3 earth shattering instruments of torture all going off simultaneously in an unfamiliar hotel room setup is a pre-race injury just waiting to happen.

The bus trip to the foot of Mt Taranaki took no time at all helped by like-minded ‘athletes’ full of talk about strategy, training and of course goal times. When the guy next to me asked the inevitable “what are you hoping to run” I replied with “anything under last years 3.20”. Walter White would have approved of my cool calm persona at that point. You see the reality was that inside I was just brimming with confidence. So much so that I dared not, even to myself admit to the likelihood of a sub 3.15.

While waiting in line for a portaloo I looked above searching for the tallest pine tree. 30 to 40 knot winds carrying a second cold front was due to hit mid-morning with heavy rain and even stronger winds by midday. There had even been the odd weather warning about it. Wind from the west I could cope with but if it came from the north my day might turn ugly. It was still 30 minutes from the start and those trees were hardly moving. Another MET Service ‘shot in the dark’ I thought to myself as I looked ahead now thinking, why do men take longer than women doing their business? 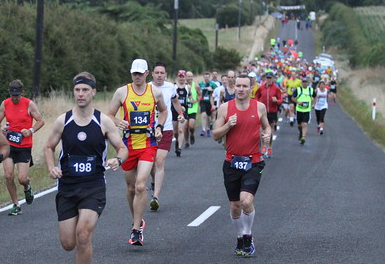 I felt great and so I should. I was in the best shape of my life finishing the Tarawera 60k Ultra a few weeks earlier and having trained specifically for this marathon which falls away considerably to the beautiful Waitara beach below. I had done a lot of downhill quad work to negate the cramps I suffered the previous year. And I’d run far too many 30k training runs to even count. So with a time of 1.35 at the half way point and feeling so full of running, I did all I could to hold the emotion in. I dare not dream, at least not just yet.

The wind had been steadily building and was now starting to really bother me. To counter it I tried to stay as relaxed as I could in the strong gusts. Doing so allowed me to conserve energy and wait for relatively calm periods where I’d run faster than marathon goal pace. It worked well up to around 27k when I turned for home and now pointed to an exposed north.

On the odd occasion I can have filthy thoughts and yet even I was surprised at the depths of depravity I was able to conjure up Saturday morning. Well of course the MET Service were targets for being so damn accurate for once. Others included big logging trucks I perceived as traveling way too fast only adding to the headwinds as they roared past. I even imagined the Race Director some 35 years ago purposefully choosing a South to North course for shits and giggles when one on the other side of the mountain could have worked just as well.

With 3k to the beach and finish and with the wind getting even stronger I calculated that 3 sub 5s would get me a useful PB. Looking back it was at this point, when I was fighting as hard as I could, that something truly wonderful dawned on me. Where was the wall I’d hit in every marathon previously? Sure it had been tough going but the pain and struggle felt very different and manageable. So much so that for once I was able to fully enjoy the moment crossing the line in 3.18.24, a 2 minute 9 second PB.

After collecting my 10th full marathon medal I jogged back to the bus as part of my new ‘cool down’ post-race routine. It must have been parked at least 350m away which would have made onlookers marvel at my endurance and athleticism. I doubt very much this feat could have been achieved however had the bus not been positioned in a southerly direction.