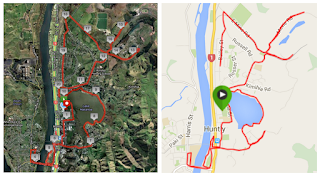 The image on the left shows the Huntly Half Marathon course taken from its website. The image to the right shows my attempt at running that same course but with one slight anomaly. Have another look at the 7k mark. Do you see it?

Now I’m no Pythagoras but let me say this, I’d estimate that 999,999 times out of 1,000,000, runners the world over would manage to navigate their way around any course the way they are supposed to with the help of cones, signage and marshals. When the latter goes AWOL at a fork in a road, bad things tend to happen.

It turns out that the leading 3 runners accompanied by race officials on bikes took the left turn they were supposed to. The accompanying pack, made up of around 80 of us careered on straight ahead up and over a hill. What did strike me at the time was the unusually large numbers of locals who’d come out to support us. Or was it that they were just bewildered at this unannounced stampede of city folk invading their quiet rural street.

Another turn and then out of nowhere we were met head on by runners coming directly at us screaming wrong way, wrong way, turn around, turn around. By this time the locals must have thought they were extras in some kind of Benny Hill commercial with an R18 rating because the profanity was, well … breathtaking.

After that 1.5km detour and back at the fork in the road the congestion just added to the comedy that this race was fast turning into. Packing it in and walking back to the car just wasn’t an option because on that day I was running for a mate of mine and besides, I’m no quitter.

I’d been running well to that point too. Really well (Garmin splits here). There’s nothing more demoralising though than hitting course makers that say you are nearly 7 minutes slower than what your watch is telling you.

At 21.2km I stopped my Garmin and continued on to the finish. Crossing the line I was angry, pissed and overwhelmingly disappointed at not having the hard work I’d put in rewarded. On reflection though, mistakes made by others happen and I’m over it now. I ran well and can be thankful for the opportunity to run and then share it with you but …

DAMN IT … where was that bloody marshal!

And as a footnote: Earlier today I emailed the race Director and demanded with great authority that my name along with time be removed from the results page which they did no questions asked. Then having cooled down and remembering that the finishers’ medals were to be posted out later due to delays in manufacturing I wonder, will I still get mine in the post? … DOUBLE DAMN IT!