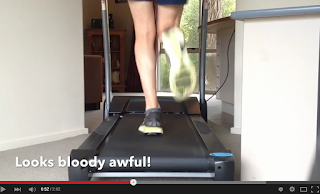 The above treadmill is the York T200 which I recently rented for a month. I wanted it to help identify form issues others take delight in pointing out but I’m completely unaware of. You see I’ve modeled my running style on the great Haile Gebrselassie. Video work of me on a treadmill would help reinforce that he and I still have a lot in common and all was well with the world. The York T200 replaced the York T200 plus which was delivered a week earlier that had damn near killed me!

Excitably I ramped up the speed of the new improved T200 plus. My girls seemed impressed with their Dad reaching 14km/hr and cheered. Settling in to the 10km ahead of me I adjusted the volume of my earphones. Friday night political talkback, it doesn’t get much better than that.

At around 3km I smelt something burning and yelled out “check the oven, for the love of everything holy please check the oven” I screamed. Nothing. Nothing generally means pandemonium as a cover up unfolds. All of a sudden my thoughts on a dinner substitute was shattered as the treadmill stopped dead. No gentle slow down either, no, no, no, it stopped absolutely dead like it had jammed. Had it not been for my super human reflexes I’d have run clean through the wall positioned not even two feet in front of me.

An E1 message in red intermittently flashed on the control panel. To add to the chaos, that burning smell had filled the room and was now in the kitchen. Placing my hands on the mat to release the belt was a bad idea because it was hot, very very hot. That’s a huge relief I thought to myself, not tonight’s dinner after all as I made my way to the couch to put my feet up and call the rental company. 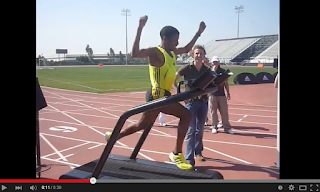 Have a look at this video of Haile running sub 4 minute per mile pace on a treadmill. Boy he looks good doesn’t he? An E1 event at that pace isn’t worth thinking about.

I’m now fully committed to the upper body and core workout schedule I set myself earlier on. I think it’s making a difference too. This past week 4.30’s seem effortless most of the time and a 4.10 feels like I’m only at 80 percent effort. Time to consolidate though rather than push for more. In the meantime I’ll have another look at that treadmill video again for form differences between Haile and I, now where are my glasses.