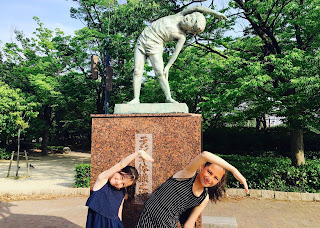 Spending most of Saturday at Nagai Park in the heart of Osaka was brilliant. The city planners of the 1950s certainly got this one spot on. Stadium Nagai dominates the eye line from the entrance and like an excited schoolboy, and without a word, I ditched the family and hurriedly made my way in for a closer look. As I approached my enthusiasm heightened almost to boiling point once I realised that the noises within had to be those of an athletic meet. Would I be able to get a glimpse inside this 50,000 seat colossus? 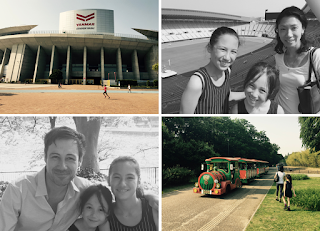 In no time we found ourselves sat at the highest point looking way way down on the performances below. I for one soaked up the atmosphere from my tiny plastic bucket seat. I marvelled at every event that included the 800m, 400m hurdles, the 200m, 4 x 100m and the long jump. My only regret was missing the pole vault which had concluded shortly before we arrived.

The girls enjoyed a soda each while I sipped an ice coffee. I’d have taken a few more pictures but these days’ photography inside stadiums just isn’t allowed. Such a shame really.

Later on we navigated the hour long botanical walk also within the Park which reminded me of home and the trails I used to run.

Nagai Park, a jewel to cherish and return to for sure as often as we can.

Sub 3.10 training is going well. I haven’t missed a run, a distance or targeted pace. I feel fresh with no discernible discomfort. I may even have found myself a coach to help me along!