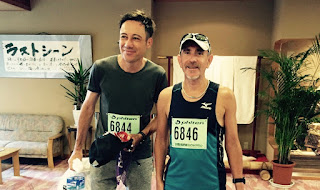 Kyotango, a collection of coastal towns overlooking the Sea of Japan. Looking across the water I could nearly make out the two Koreas and further up, the Great Wall of China. The region is famous for its breathtaking ocean views, seafood, hot springs and silk fabric (Tango Chirimen).

All very nice but for me the place was most notable for Jiroemon Kimura. Born in 1897 Jiroemon spent most of his life in the area. As a postal worker he toiled diligently providing everything he could for for his family until his mandatory retirement at age 65. Not ready to lie down, Jiroemon turned his hand to farming. 25 years later at the ripe old age of 90 he decided to finally take things easy. He lived a further 23 years until his death in 2013 at age 116. He had held the Guinness record for the oldest man alive and given the horrendous hills and climbs in the area I’m not surprised! He must have been fit as a bloody fiddle.

Last Sunday I ran one of those hills in this years Tango 60km Ultramarathon and unlike Jiroemon it nearly killed me at age 48!

My good mate, mentor and coach, Scott Brown texted me at exactly 11am with the message ‘At the station but can’t see Mr Donuts’. I texted back with ‘You must be on the other side of the tracks, wait there, we are on our way’. Lugging my wife’s overnight bags a further 10 minutes in 28C heat and humidity was just asking for trouble, I muttered to myself. That morning the unmistakable signs of a cold or flu were beginning to show. Then there was my dodgy upper right calf to consider and out of nowhere my right IT band began to flare up. “Hurry” my wife yelled, we don't want to keep Scott and his lovely wife waiting”. 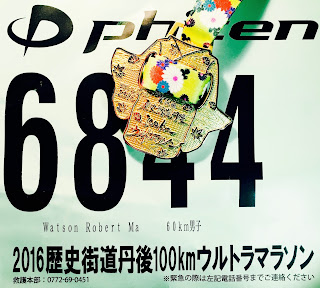 Being driven as opposed to taking the train was just brilliant. Scott’s late decision to run had made our weekend. There was so much to talk about on the way over. The girls were looking forward to a nice hotel, the sento (Japanese Bathhouse) and local seafood. Scott and I on the other hand talked all things ‘running’. For Scott, the Tango Ultramarathon would be his first at that distance and considering he hadn’t trained for it, I thought an upset was definitely on.

At 8.45 the music intensified. On stage a rather youthful, attractive and agile dancer began her aerobic routine while at the same time screaming out instructions. Without hesitation, everyone submissively began these impossible and reckless moves. Where was the simple crossover leg calf stretch, plank or quad pull I was in need of? Mercifully the countdown began and in no time we were off in calm, overcast conditions with the threat of rain in the forecast.

Days earlier, I’d worked out that to run around 5 hours and 30 minutes, a top 50 placing might be possible. Running 5 minute per kilometer splits and allowing 30 minutes at drink stations was a brilliant plan. It seemed simple enough but an ultra is a long way. A very long way.

Maybe I hadn’t acclimatised as much as I thought I had because the first 2 hours felt really humid. I was drenched early on and sweat dripped continuously from my fingertips. These days I understand the importance of hydration. I was determined to stay healthy and drank plenty of fluids and salts at every aid station along the way. 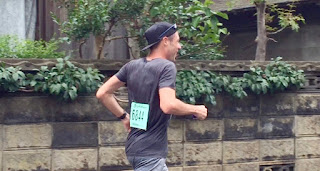 The Tango Ultramarathon has two options. The 60km or the more demanding 100km distance. For us 60km runners the hill (mountain) at 15km was tough. A climb of around 200m over 4 kilometers wasn't fun. Consolation was knowing that the 100km runners faced something far worse. A whopping ball breaking 500m over 10 kilometers. I’d imagine the run down the other side would have been quite exhilarating until the realisation they still had another 30 kilometers to run sunk in.

At 40km and now in torrential rain we merged in with the 100km guys and girls. Aid stations were very frequent from this point on. Every 3 to 4km which in hindsight might have been a mistake for me because I took full advantage of every one. If the race had been just the 60km distance you might have expected them to be spaced every 7 or 8km. At the time I never considered running past one which in all honesty I probably should have. 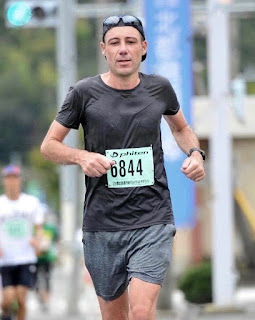 I felt every stride with 10km to go. Nothing serious just generally sore all over. I’d run two ultras previously and never felt quite like this. Running on the road as opposed to running on trails made a big difference. The constant ups and downs of the course and on tarseal had banged me up badly which left me hobbling for days after.

Up ahead waiting on the side of the road I recognised a familiar face. “You alright?” Scott asked as the rain continued to fall. I reckon he’d waited for me which was both a blessing and a curse. You see with 4km to go I was ready to run, walk it home. Instead, this was about to be the first time we’d run together, ever. Don't tell Scott but those were the most enjoyable and satisfying minutes of my entire race.

Long ago Scott had inspired me to take running a little more seriously. I even began this rarely read blog having followed his a few years earlier. As we turned for home with the finish line now in sight I considered picking up the pace. A John Walker, Nick Willis, Peter Snell, Murray Halberg, Jack Lovelock or even Arthur Lydiard sprint to the line was definitely on. 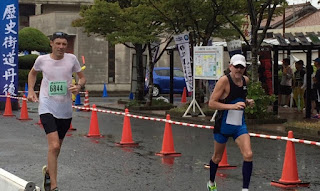 ‘Aussie Mentor Concedes to Kiwi Protege’. Yes, yes I thought as I began to surge then nah. That ending wouldn't have worked as well as this don't you think? Besides, on that day and at that time, I was absolutely positively buggered.