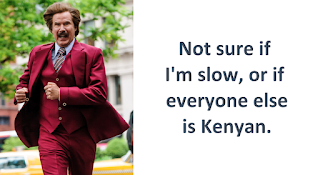 After running the Osaka Marathon, I made the following comment to our good mate Ewen saying “Haven’t run for 10 days. I need to get back out there. I wonder at what point will I start losing fitness?”. “About 3 days ago” he replied.

My comeback run didn't happen for a further 11 days! I’m such a lazy sod, I thought to myself as I leapt back into it bounding along at great pace defying my age of course and still basking in my earlier marathon PB. 10k at 4.38 min/km pace didn't seem too hard in the slightest I scoffed. After 3 weeks without running, had my fitness (VO2 Max) suffered like Ewen had suggested? 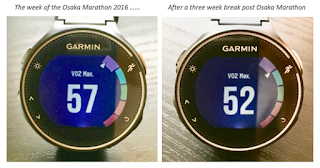 I’ve never run a 10k race before. Consequently, I don't have a 10k PB. I reckon there’s a very high probability I’ll have a new PB shortly given I’ve just entered the Sakai City 10k and Takatsuki City 10k both in January.

So, what to aim for. A quick bit of research suggests that the World Record time of 26:17.53 set by Kenenisa Bekele of Ethiopia in 2005 might be a little tricky. I say this given I only have a month to train you understand! 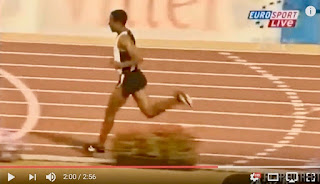 I’ve targeted an ambitious sub 40. At this stage I fear I’m still a little unfit for the milestone. I’ll need to run consistently from here on if I’m to get anywhere near it. In addition I'll need to try something new ...

I’ve never run to warmup prior to any race in the past. Lazy I guess. At my age however it takes a good 2k to transition from ‘old man shuffle’ to, well ‘old man shuffle’. That said, I just won’t have the luxury to ease into such a short race chasing a time so I’m thinking about a 2k run at 5min pace 30 minutes before the gun.