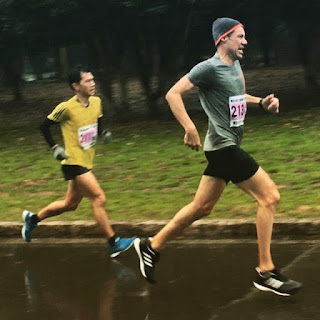 It was nice to be moving my legs again after the 90-minute train ride. My left ankle felt good too after the slight strain I suffered a week earlier. Walking from the Shinkanaoka Station to Oizumi Ryokuchi Park took around 15 minutes. This is Scott Brown territory and with the exception of the lousy weather with rain now bucketing down, the township looked really nice. Trees lined the wide-open streets and dotted around were carefully manicured gardens. 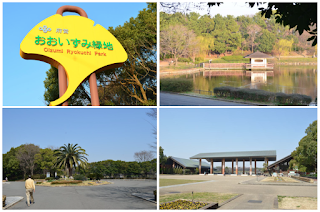 It was cold and I contemplated wearing compression longs for the race. I found it hard to get motivated. The thought of running near my goal time of a sub 40 seemed bloody ridiculous. “I have another 10K race in two weeks” I announced to my family. “This is just a warm up race so don't expect too much. Oh … and I’m recovering from injury you know!” “Yes Dad” my girls replied in perfect chorus as if they’d heard it all a thousand times before and knew the drill.  I want to go home, I thought to myself.

My mood changed once I caught up with Scott and his wife. He apologised for the weather which I thought highly appropriate given it was getting worse. To deflect my attention, he insisted we warm up and in shorts! I never warm up with a run but after the start I had I’ll never not in any future race. Ewen wanted me to include a series of short strides but on this day, that was a bridge too far.

In the build-up to this race I’d worried a lot about my first 1K split. I thought a 4.15 to 4.30 would be acceptable and I’d build from that. Running a 3.55 surprised me and if Scott had been nearby I might have thanked him for the pre-race warmup but he was long gone and finished well ahead of me.

On reflection, I love this distance. It’s tough for sure but not in a physically debilitating way. If there is such a thing as a lactic euphoric high, then that's what I had endured the whole way. By 8K I’d run splits of between 3.55 and 4.08. I’d given away the sub 40 and set my sights on a guy in yellow up ahead. I also craved my first age group prize of any sort and felt that the man I was now pursuing was lucky last on the podium. For two kilometers I chased and at least twice I closed to within a few meters only for him to sense my unwelcomed presence and then extend his lead.

Settling 20m behind him I rethought my strategy. I was bigger, stronger and had the stride length of a gazelle damn it. I needed the element of surprise. Then, out of thin air, an image of Rod Dixon running down Geoff Smith to win the 1983 New York Marathon filled by consciousness. That’s it! I’d conserve a little more, then at the final turn catch him by surprise with a burst of speed Rod himself would be proud of. 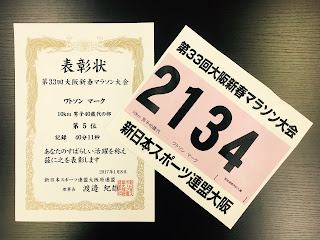 Scott’s wife Emiko is my new hero. She took the above photo that shows the effort required to overtake the man in yellow on that final stretch.  I finished 5th in my age group, 12/140 overall in a time of 40.11. The guy in yellow, 6th. Top 6 in each age group got special commendation certificates. My first 10K race but more importantly my first running prize ever.

Note: I apologise for any embellishment this post may have been subjected to … you understand. 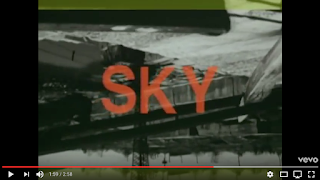