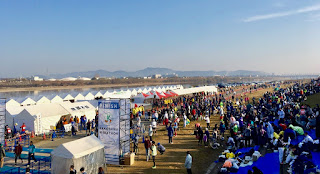 I pushed hard up a short rise to the bridge, turned right then began to cross. It had to have been 400m long but I could see its end. I don't know what it is about bridges but for some reason I seem to run faster when crossing them. That surge filled me with an excitement that dulled any pain or cramp I’d felt earlier. The turn for home quickly approached. Just 7 kilometers remained. I was well ahead of my pre-race target splits too. This was indeed uncharted territory. I hadn’t bonked, I hadn’t bloody bonked! Not even close! I was literally on the edge of glory but then ...

I awoke from what seemed like no sleep at all to the sound of my relentless alarm clock strategically I placed in the farthest corner of the room. It was 3.50am Saturday 23 December. Race day for the Kakogawa Marathon. It was cold too. Barely 3 degrees. Kakogawa was a couple of hours away by train which was long enough to entertain the thought of taking a nap on the journey, which I did.

Coach Scott Brown arrived a few minutes after me. A non-running observer would probably grapple to understand the pre-race habits and rituals of the middle-aged, amateur marathon runner. When in groups of two or more the excitable chatter is relentless and now having been recorded over many events, somewhat predictable but no less bewildering:

I passed the halfway point in 1.32.46 and felt good. 4.23 splits were a little ahead of where I’d planned earlier. I worried about whether I’d pay for it later but pressed on. The course was super-fast. Flat for the most part and scenically engaging too with the Kakogawa river either to our left or right on this there and back course. The public support was amazing too with some locals setting up their own food and drink stalls for runners to stop and enjoy.

The turn right for home quickly approached. Just 7 kilometers remained. I even felt I had something in reserve to push hard over the last 5 kilometers. I steadied myself, trying to contain the excitement within and not to get too far ahead of myself.

I pressed harder on the flat below the bridge. 6 point something kilometers remained. Soon I became aware of a guy in a blue t-shirt on my left shoulder hanging with me. Surging and then falling back to sit where he’d been earlier. He grimaced a little and then said to me ... it’s like this every year. Then, all of a sudden it dawned on me. We were running headlong into the teeth of a persistent blustery wind. Buggar.

I fell back slightly as I felt all enthusiasm suddenly drain from my tired body. The man in the blue t-shirt now ran 10m ahead of me. Without thinking I pushed hard and the gap closed to a metre. I knew he was pushing so I stayed with him. The increased effort helped a lot and I felt more and more energised.

Tucking in behind him now for what must have been a kilometer felt easier. The drafting had made a big difference. It was my turn now and I pushed ahead. That bloody wind was a real disappointment for sure but I wonder now if it had been for the best. We exchanged the lead 4 or 5 times to the finish. No words as we crossed the line, just a pat on the back for the man in the blue t-shirt and a smile. 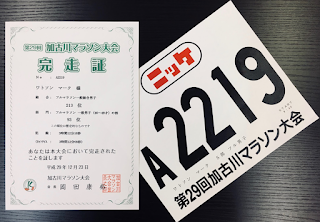